A Couple of Places That Taught Me Valuable Lessons:

I would like, today, to share memories from a couple of places I visited during the days when I was starting out as a corporate journalist. I like to think that I visited these places to get inspiration about my future as an RJ with a journalism degree and indeed, I did get inspired that it was time the public was made aware of the truth of corporations and how they operated:

I visited Silicon Valley because it was, in my opinion, the place where the future of big business lay – eight years later, I’m glad I made that trip, because today, computers, smartphones and ‘apps’ have become the biggest money spinners and the most dominant corporate companies are Apple, Intel, Google, Facebook and so on. My original plan had to been to get interviews from a couple of entrepreneurs. I was supposed to meet them both at Buck’s of Woodside a restaurant famed as a focal point for the sort of people I intended to meet and interestingly, the place where services such as Tesla and Hotmail were incorporated.

The interviews went great and did raise some interesting points – one of the interviewees told about how he was starting a new software company, he believed that the best way to reach the public was to resort to social media and blogging, and really inform the people about what his service could do for them rather than using billboards and television commercials, which might figure into his marketing campaign later. Tech start-ups should definitely take this advice since it won’t cost them much and they’ll be addressing a global audience given their product/service is something unique. In fact, I’ve frequently quoted his words in my radio shows since then.

While there, I decided to kill some time by visiting a famous landmark since I was something of a tech geek. The HP Garage, the place where Silicon Valley was born, was my intended destination. In terms of inspiration for a business journalist, I could think of no better place than this – a small rental house that produced a dominating tech giant and an inspiring story that led to so many others. 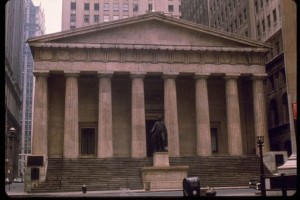 A trip to Wall Street is recommended for all commerce students, and corporate journalists won’t do wrong in visiting it either. The truth is that this place is a hotbed for the most aggressive kind of marketers – stockbrokers. These individuals represent the zenith of classical marketing where company stocks are sold to names written on call lists using flashy jargon and marketing ploys, the customers are identified by the numbers on the list and nothing more. I was the proponent of the notion that each customer should be thought of as a whole informed ‘audience’ and be present with the whole truth regarding a service and Wall Street was the exact opposite of my ideology. However, I still believed that it was a good idea to gain an insight into the flaws of the present corporate system before trying to make an effort to change it, which is why I signed on for a trip to Wall Street with the touring company ‘The Wall Street Experience’.

The tour was thoroughly informative, with the tour guide being a former stockbroker himself; our tour group got to see all the famous landmarks that are representative of corporate America – the Stock Exchange, the Federal Reserve and, of course, Wall Street itself. We were told actual stories about how the whole financial backbone of the US was functioning and, for me, these stories did shed some light on what drives corporations after they have gone public.

I was so impressed by the tour that I signed up for the more intense ‘Financial Crisis’ tour the company offered which was meant for industry professionals! The tour gave detailed information regarding the financial crisis and the factors which contributed to it. The ruthlessness involved in the day to day life of a successful Wall Street Trader was shocking and instructive at the same time. I learned about technical terms such as Credit Default Swap (CDS) and Collateralized Debt Obligation (CDO) that represented financial transactions that brought down entire institutions.

My trip to Wall Street strengthened my resolve to inform the consumers about how best to make a decision regarding the purchase of a product or service. I had seen first-hand how easily so many people were swayed to invest into a company by the honeyed words of stockbrokers and I decided it was time people realized the truth.