In the Thick of It: My First Hunt

There I was, in the thick of it. The sun peeking between the hills in front of us. My partner Geoff – an experienced coyote hunter – is whispering we need the sun on our backs. Make it harder for prey to spot us. Besides, we don’t want the sun in front of us hindering our vision.

I have never hunted before and will not get into why. Geoff is a friend and has tried to get me out for years. He finally convinced me I had to at least try. So, after several weeks of research, including the importance of your stand, the unpredictability of coyote behavior and reviews of some top notch rifle scopes, there I was, in the thick of the hunt in Coulee County, Montana. 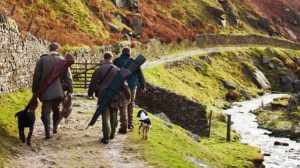 We spent the drive (and the days before) setting up the ground rules. As most hunters tend to go solo, it is important that teams be on the same page. Hunters have individual styles and a responsibility to avoid even the smallest conflict. The worst that could happen is you end up not catching prey tripping over each other. At worst, you shoot somebody. I was taking notes. Geoff told me to knock it off. In the wild, I would not be able to refer to notes. Any unnecessary movement – even leafing through a small notepad – was forbidden. In fact, limited movement and noise was at the top of the list. Also on the list was shooting etiquette, establishing the zone of fire for each of us and who the primary shooter would be, the person who got first crack at prey. Geoff decided that should be me.

We had already scouted the location, using Google Maps and Geoff’s own familiarity with the region. Once out the truck, we checked our gear and got into our camo. We did our surveillance: looked for tracks and bodies of water (you’re more likely to come across coyotes as they eventually need to quench their thirst) and scoped out hazards like areas we do not want to shoot towards. 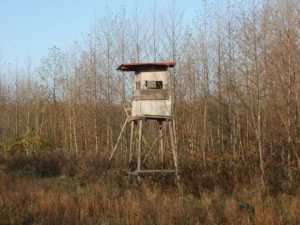 Geoff helped me find my stand (basically the spot where you wait) before setting up his. We were both on our stomachs, weapons ready, hiding in tall weeds. Our calls and decoys were about 30 yards to the west. When I signaled I was ready, Geoff activated the “calling,” a mimicked cry of an animal in distress. Any coyote, figuring an easy meal was waiting, would seek the call.

Geoff called for about 10 minutes, took a break, started again. We were on the ground almost an hour before my partner signaled me. And there it was. A coyote focused on the call, obviously cautious, but looking off toward the decoy. I saw the sunlight in its eyes, creating that alien glow that you usually see in photographs. I was holding my breath. When I let it go – surely as quiet as I am sure the coffee on my desk is still hot – the coyote looked right at me. Its eyes still aglow. My head was fully covered (cap, hood, face mask), supposedly blending into the background, but the animal found my eyes. And it ran. Long before I even remembered I had a rifle.

My first hunt. Geoff has not let me forget how I screwed that up. But I didn’t. More than anything, the brief encounter made me realize how I really feel about hunting.